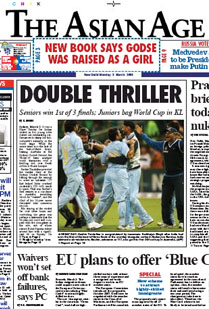 Sachin Tendulkar scored a brilliant century, his first in Australia and 42 nd in ODIs, as India defeated Australia by six wickets in the first final of the Commonwealth Bank tri-series at the Sydney Cricket Ground.
The Master-blaster, who paced his knock to perfection, completed his priceless ton in just 106 balls sprinkled with eight sweetly timed boundaries. Tendulkar remained unbeaten on 117 and kept Indian run-chase on track. An opening partnership of 50 was the ideal launching pad, and even three wickets fell fairly quickly thereafter, Tendulkar’s unbeaten 117 took India to victory. Chasing a 240-run target, India were off to a confident start in the first final against Australia.
A sturdy innings from Matthew Hayden, an equally good show by the Indian bowlers, set up the first final of the CB Series on Sunday. Australia scored 239 for 8 in 50 overs after winning the toss and electing to bat. Andrew Symonds and Mathew Hayden struck a 100-run partnership for the fourth wicket in just 17.2 overs, but Symonds’ dismissal gave the much-needed respite to the Indians. Adam Gilchrist (7), Ricky Ponting (1) and Michael Clarke (4) - all fell cheaply as Australia struggled at 29 for 3 from seven overs.
Initially, Hayden was at his aggressive best and raced past the 6,000-run mark in one-day internationals as he got off the mark with a boundary straight down the ground. Harbhajan Singh dismissed Symonds, who steadied the ship with Hayden, for 31 at midwicket. Harbhajan had been struggling to get his line and pace right before that dismissal, but his confidence surged once he had a wicket and the rest of his spell was impressive as he finished with 2 for 38. Praveen Kumar bagged the second wicket in his opening spell when Australia captain Ricky Ponting played on for one.
Ishant Sharma dismissed Michael Clarke for four, caught by wicketkeeper Mahendra Singh Dhoni. Replays suggested that the batsmen had missed the ball. Ishant Sharma had 1 for 32 from eight overs, but was forced from the field by an apparent hand injury. India sprung a selection surprise, naming leg-spinner Chawla for his first match of the series at the expense of pace bowler Munaf Patel.
Australia recalled Hayden after he was rested in Friday’s match against Sri Lanka, with Brad Haddin and the unlucky Stuart Clark missing out again for the home side. Never in the 30-year-old history of the triangular series have Indians managed even a solitary win in the finals against the hosts.

Off-field controversies will finally take a backseat as India will rely on their young guns in an attempt to wrest the advantage in the first of the best-of-three finals against Australia in the Commonwealth Bank cricket tri-series at the Sydney Cricket ground on Sunday.
The summer Down Under has been marred by ugly spats between the two teams and Indians will be keen to fire themselves up after Matthew Hayden’s “obnoxious little weed” comment on Harbhajan Singh hogged the limelight in the last few days. The war-of-words has set up a thrilling contest, though beating world champions Australia in their own den would be a tough ask for Mahendra Singh Dhoni’s young outfit.
Australia will not make the mistake of taking the Indian team lightly as the visitors have shown intent in the league encounters. Ausralia have beaten India twice, lost once while the first match ended in a washout. But with the hosts beaten by Sri Lanka in the last league match, their confidence is certainly not sky-high going into the first final and India will be looking to cash on it.
The problem for both teams has been their fragile batting order that has cracked under pressure time and again in the series. India’s main concern will be the opening combination as Sachin Tendulkar has partnered three different batsmen in the series so far. Virender Sehwag, Gautam Gambhir and Robin Uthappa have all opened with Tendulkar and it will be interesting to see who skipper Dhoni prefers in the crucial match.
Australia’s top-order has not displayed the consistency that they are known for and has lost wickets in heaps. India will certainly want their fast bowlers Ishant Sharma and Irfan Pathan to rattle the Australian top-order Sunday.
But despite Australian batsmen not being at their peak, they have managed convincing victories in the series, which reflects the strength of the side. Brett Lee has truly been Australia’s bowling spearhead in the summer and together with Mitchell Johnson, Nathan Bracken and James Hopes, their bowling has done the dominant force in the league matches. India team (from): Mahendra Singh Dhoni (Captain), Gautam Gambhir, Virender Sehwag, Sachin Tendulkar, Yuvraj Singh, Robin Uthappa, Dinesh Karthik, Irfan Pathan, Suresh Raina, Rohit Sharma, Manoj Tiwary, Harbhajan Singh, Praveen Kumar, Munaf Patel, Piyush Chawla, Ishant Sharma and S. Sreesanth
Australia team (from): Ricky Ponting (Captain), Adam Gilchrist, Nathan Bracken, Stuart Clark, Michael Clarke, Brad Haddin, Matthew Hayden, Brad Hogg, James Hopes, Michael Hussey, Mitchell Johnson, Brett Lee and Andrew Symonds

Australia won the toss and decided to bat

The Sydney Cricket Ground (SCG) is a sports stadium in Sydney. It is used for Test cricket, one-day international cricket, some rugby league and rugby union matches, and is the home ground for the New South Wales Blues cricket team and the Sydney Swans of the Australian Football League.